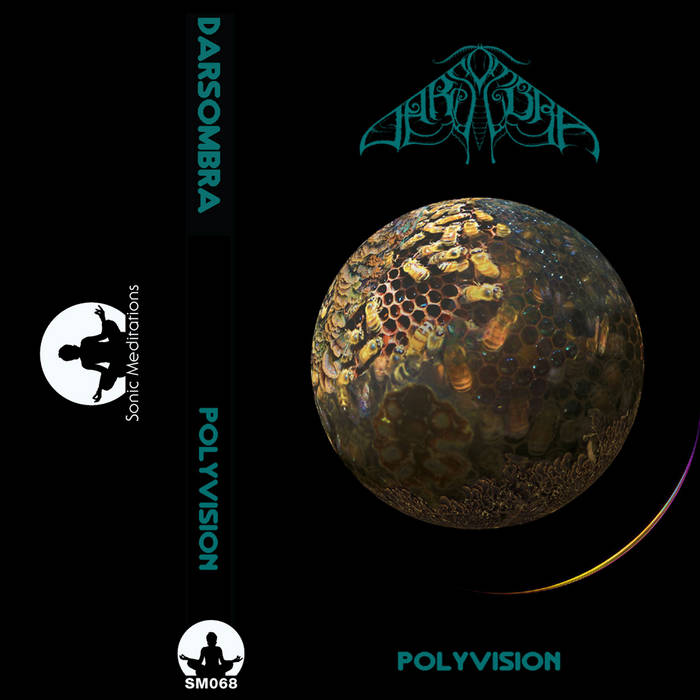 桃太郎 ｍｏｍｏｔａｒｏ Great droney psychedelia from Baltimore. Some of the best local talent our city has to offer. Favorite track: Underworld.

THE OBELISK .NET
Last year, Baltimorean experimentalist duo Darsombra went on tour. Pretty much for the whole year. They played well over 100 shows on what they dubbed the “Three Legged Monster” tour — it took place over the course of three separate legs — and they played plenty of other shows besides. That nomadic existence seems to feed into the sense of revelry and freedom that one finds in listening to Polyvision, the two-piece’s latest studio full-length for Translation Loss Records and first since 2012’s Climax Community. Or at least that’s easy enough to read into the outing’s two extended, multi-movement component tracks, “Underworld” (21:45) and “From Insects… to Aliens (The Worms Turn)” (22:31).

Guitarist/keyboardist Brian Daniloski and keyboardist/vocalist/visual effects creator Ann Everton bring a clear sense of composition to both pieces, but there’s an undercurrent of improvisation atop which the building layers of samples, loops, synth and effects create their swirl, and where so much of drone/noise is hell-bent on post-apocalyptic desolation, the creation of all-gray spaces, Darsombra offer a full spectrum of sonic color across Polyvision. Moreover, there are moments where they sound truly and genuinely playful in what they do, Daniloski‘s guitar or the keys winding around celebratory figures in one track or the other, bringing about a spontaneous feeling moment of arrival — “We’re here now and isn’t it great here?” — that also would seem to fit with the presented-as-being-completely-on-a-whim turn to nomadic living that the band made in 2015. Have drone, will travel, will be glad to end up wherever.

That’s a simplification of the mindset, obviously, but the underlying point is that Polyvision feels unafraid to embrace joy as it moves through its complex and ritualized-feeling soundscapes. Not that it doesn’t also have its foreboding stretches, as any even vaguely drone release with a low tone will — soundtracks have conditioned us to hear things a certain way, even subconsciously — but though its two titles are somewhat dark in their themes, with the creepy vibe and strangeness of the construction of “From Insects… to Aliens (The Worms Turn)” and an “Underworld” traditionally being a place not known for its pleasant afternoons, it’s not long into Polyvision before Daniloski and Everton are exploring colorful, rich textures.

It’s still fair to call Darsombra instrumental, but vocals do play a large role in setting the vibe, and that happens relatively quickly in the first movement of “Underworld”; voices almost choral loop in with undulating volume swells, fading in and out again, moving toward an end just before the five-minute mark where all goes quiet before the next wave starts with what seems to be both their voices leading to the establishing of a slow, patient rhythmic guitar figure around which the keys and a brightly progressive and extended guitar lead unfold. It’s here, making its way toward and past the midpoint of “Underworld” that Polyvision first and perhaps most effectively conveys the joy at root in its creation. It finds itself in a bouncing, almost child-like section of fuzzed-out keys and guitar — still with that original rhythm beneath; it doesn’t leave just yet — that receives due exploration before giving way to rolling waves, which is how “Underworld” ends. At the ocean. I’d assume that’s a field recording from the band, rather than a keyboard sample, but never fully knows. In either case, it’s hypnotic and signifies the kind of perpetualness Darsombra are looking to convey in their material as well as a peaceful moment to collect oneself before moving onto the second, longer track.

“From Insects… to Aliens (The Worms Turn)” finds itself building layers of proggy guitar, more active, more intense, with washes of cymbal added for effect in the first couple minutes. A swirling solo takes hold and winds its way into another seemingly simplistic progression around eight minutes in, but it gives way to lower rumbling undertones, if only momentarily before the guitar surges forward again. Though only part of Darsombra‘s broad approach, Daniloski‘s lead work isn’t to be undervalued. Aside from being technically proficient, it brings a rare spontaneity to what might commonly be thought of as a drone or noise record, neither of which is a style known for working off the cuff, adding to the atmosphere of positivity and basking in the spirit of an apparently ceaseless creative drive. Just past 15 minutes, Everton begins a vocal loop that is ultimately the introduction to the final movement of “From Insects… to Aliens (The Worms Turn)” and after a final crash of guitar, she’s backed by noise that indeed sounds like and may or may not be bugs, like crickets at night something from the forest.

That Darsombra would choose to end both of Polyvision‘s cuts with nature sounds — granted in the closer the human voice is still more prominent in its long fadeout — and one can’t help but wonder in light of the album’s title if the band isn’t trying to see multiple sides, and trying to show their audience multiple sides, of how humans interact with the world around them. Of course that’s speculation on my part, but if you take anything from it, take it as a sign of the depth of the evocation that the duo enact over the course of the album’s 44 minutes. If what they gleaned from those 100-plus days on the road together are the lessons they seem to be teaching here, then their time was well spent.

All music, art, and video by Darsombra, which is Brian Daniloski on guitar, bass, and vocals, and Ann Everton on synthesizer, gong, vocals, and artwork. Recorded at the Refuge, Baltimore, MD, 2015-2016.
Mastering by Bruce Leighton at Data Stream Studio, San Francisco.

This album is a gift of gratitude to our family, friends, and fans! Much love, and thank you!
tags

Bandcamp Daily  your guide to the world of Bandcamp